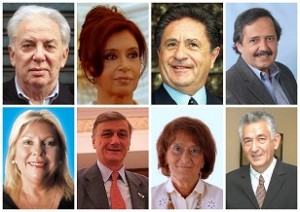 We are just a few hours away before argentines will choose the candidates for the presidential elections in late October. Yes, for the first time, this coming Sunday August 14th, the country will held open, simultaneous and compulsory primaries (PASO for its acronym in Spanish). We have to elect those that we want to elect later on.

What are the PASO?

If you find it confusing, you are not alone. The vast majority of Argentines don’t seem to understand what they are for, and it is not their fault, it is just not clear.

In a few words, a new law obliges all political parties to choose its candidates by holding primaries. That is not new, it happens in most democratic stable countries.

The novelty is that:

The idea behind this new procedure is to force all parties to open their internal process to select candidates and to make it more transparent, avoiding situations where the leader chooses his or her successor (“a dedo”), or the candidate is chosen by internal discussions not open to the rest of the members.

Now, often Argentine politics has an ability to make simple things complex and this is a case: all political parties (or alliances between them) are presenting only ONE candidate to the primaries, making the entire process pointless.

In fact this Sunday Argentines we’ll be holding a virtual unofficial first round of elections, even if a lot of them are just not aware of it.

A miracle needed for some candidates

There are now 10 pre-candidates, all representing one party, that were selected by a process that the primaries tried to impede: negotiations among the main political figures of each party.

However, some of them might not make it to the next round. The new law requires pre-candidates obtain a minimum of 1.5 % of all valid votes in all the country to become candidates in the elections that is around 400.000 votes. There are at least three to four candidates that just won’t make it.

One of them is the leftist Jorge Altamira, pre-candidate for the Left and Workers Front (Frente de Izquierda y los Trabajadores) a fart left political group with little support but very resilient. A Twitter campaign started with the hashtag #amiracleforAltamira (#unmilagroparaaltamira) asking people to choose his ballot just to let him participate in the October elections.

So if the primaries have any objective, at this point we can say that is to “clean” a bit the spectrum of candidates and give a good idea of who is getting what. That is at least for the presidential candidatures, the legislative positions show a different scenario.

Who is who? All the candidates for the election

So who is who? The best would be to start with the most well known and, at the same time, most difficult to understand for an international, and even a local audience: the Peronists.

In this group we find President Cristina Fernández de Kirchner, the candidate with the most intended votes: different polls give her anything between 35 to 40 % of the votes. She is enjoying a high rate of approval of her administration after falling to the lowest level ofLatin Americain 2008 when she confronted the agricultural producers over taxation of their exports, in particular soy.

How did she revamp? If we need to make a timeline of her increasing popularity, it started with the sudden death of her husband, the ex-President Nestor Kirchner (2003-2007) in October 2010 but it is also related to the bonanza the country is enjoying with the high prices of agricultural products.

What are her real chances of getting elected? Unless something unexpected happens, she has really good chances of being once again the Head of State. The percentage of people that support her they do so with a lot of faith, not because they cannot find a better choice (which is the case with several opposition candidates).

Polls: between 35 to 40 %
Where is in the political spectrum? Very hard to do this inArgentina, and especially with the Peronists, but she can be easily be seated at the center left.

Then we have the ex-President Eduardo Duhalde (2002-2003), also a prominent member of the Justicialist Party (the official name of the Peronist party) who became the president after the political crisis that made President De La Rua resign in December 2001.

Duhalde has a peculiar link with the Kirchner: Now very critical of the administration, he is the person that helped to bring them to the top of the political structure.

He probably never imagined that Kirchner would quickly show his talents to create a proper political base to establish himself. Worst for Duhalde, Kirchner imposed a center left approach to his mandate, very different from Duhalde’s profile.

Polls: between 9 to 13%, depending on the company that did the survey
Where is in the political spectrum? Right

And last in this group, there is Alberto Rodríguez Saá, governor of San Luis province, previously ruled by his brother, Adolfo Rodríguez Saá (evidently, the province is their feud). Beyond that criticism the province shows good economic results, with high levels of employment, and development of the technological industry. Even through the crisis in 2001, San Luis managed to do the better than most of the other provinces.

All the good indicators have not helped Rodríguez Saá to acquire a national image. Most people have heard about him, yet they are not familiar with his administration. He was also a candidate in 2007 and did not make it to the first three.

Both he and Duhalde share a similar electorate, and self esteem. Instead of trying to make an alliance, they went on their own way, both wanting to be presidents and not willing to give up their dream (which most likely will stay like that, a dream).

Polls: between 4 and 6 %
Political Spectrum: Right

The centrists candidates (or the non-Peronists)

Ricardo Alfonsín, it is the second favourite after Cristina Fernandez de Kirchner. He is the son of the ex-President Raúl Alfonsín (1983-1989), a very well respected statesman that passed away in 2009 and his death gave a new push to his dying UCR party (Civic Radical Union, one of the oldest party, founded in 1890)

Sharing the same last name as his father is a great asset for Ricardo, almost unknown before the death of his father. His physical resemblance to his father also played a role in his sudden growth of popularity. And that might be his only asset.

Since the beginning of his sudden popularity Alfonsín gave image of a confused man, lacking the strength and energy of his father.

At first he flirted making an alliance with the left parties, however as it was clear that they could not agree in many points, he did a sudden move and quickly join forces with the center right parties, a move that angered several of his comrades in the UCR.

Polls: between 16 to 22%
Political spectrum: Everybody thought he was in the center and that he might do an alliance with the socialist Hermes Binner (more below) but suddenly he chose to join forces with the right wing figure Francisco De Narvaez. So now, we could place him in a confusing center right position.

It is the third time that Carrió presents for the presidential elections. Once a favourite she is slowly loosing her political appeal.

She became well known for her denouncing several corruption cases. She still does that but a great part of her electorate moved away feeling that she only denounces but does very little.

The leftists… or sort of

A medical doctor he is the leader and most relevant figure of the Socialist Party. Mayor of Rosario, the second biggest city ofArgentina, and governor ofSanta Feprovince, one of the richest and most populated of the country, he is now aiming for the big position.

He and Alfonsín flirted for a while to make an alliance, but the plan fell off and both went their ways. A real pity for them, because together they could have posed a real option to Cristina. However, going in separate ways they spread their votes as they share a, relatively, similar electorate.

Despite being the presidential candidate, she is not the most well known figure of her party, the South Project (Proyecto Sur).

The leader and founder of the party is the legendary documentary filmmaker, Fernando “Pino” Solanas who had an astonishing performance in the legislative elections in2009 inthe city ofBuenos Aires. This time his goal was to be a presidential candidate. However, when he saw the numbers the polls were giving him, he decided to step down and present for mayor of the city of Buenos Aires (which took place last July and he did not make it, not even to the second round).

So, Alcira Argumedo, a well known sociologist, was chosen as the sacrificial lamb for the party. Proyecto Sur wants to have somebody as a candidate, even if she will not go too far.

He is the man waiting for a miracle. An old fox of Argentine politics, he has always been in the far left side of the spectrum, working with the Workers Party. For this election all left parties joined forces (never seen before in local elections) because if they didn’t, with the rules set by the new laws they risk disappearing.

Despite being together they still might not make it to the October elections, as they need to gather in the primaries at least 400.000 votes. Their campaign was organized around this need and they have encouraged citizens to give them a vote just to let them participate.

The ones nobody knows… and will never know

After struggling with the electoral justice two parties managed to include their pre-candidates.

Jose Bonacci, a right wing man who reivindicates an ex military leader, Aldo Rico, that rose against the democratic regime of Alfonsín (father). He is a hard nationalist and a Peronist (yes, everybody is a Peronist inArgentina).

And last, and least, there is Sergio Pastore, a center right candidate, who does not even have a TV spot, so his face is unknown to most citizens.

Polls: they were not even included in the polls results