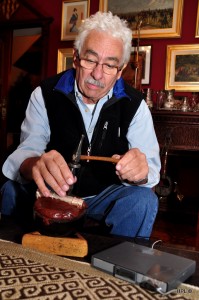 The light sound of chiselling covers the street noise that pours through the windows. Juan Carlos Pallarols, 68, stands in the center of his silversmith workshop in the old neighbourhood of Buenos Aires. He is closely examining the work of his five employees. Some are doing luxurious pens for a client in France, others carefully crafting silver “mates”, a gore for a local drink.

The morning sun softly lights his face and is evident that Pallarols is tired. For the past five months he has been working on the most important project of the year. He is making the presidential baton that will be handed to Cristina Fernandez de Kirchner, on December 10th after being re-elected as head of State last October with 54% of the votes.
The scene took place last may when I met Pallarols to find out about his work. The sixth generation of a family of silversmiths, he has made the 11 batons handed to each Argentine head of State since the return of democracy, in 1983. A symbol of power and support, every president gets one the day they are sworn in, together with a presidential sash.

“I created the first Argentine style baton,” says Pallarols, who wanted to differentiate from his predecessors that used European designs, with a gold handle and a timber imported from India.
His creation replaces the gold for 200 grams of silver. “I use silver because this country is named after the metal,” says Pallarols, referring to Argentum, the Latin name for silver.

The stick is made of “urunday” wood, a typical local tree found in the north, where he travels to select it himself. “It is inexpensive and yet, of great quality. It does not bend and is not attacked by woodworms.” A perfect metaphor for a leader, thinks Pallarols, who “should not be corrupted by parasites and be upright.”
The baton is handmade, but not just by him. Exactly 3.026.994 pairs of hands worked on it. They chisel in the handle a pattern of two hands shaking that stands for union and brotherhood. “It is a great honour and responsibility to do this baton, so I decided to share it with others,” says Pallarols.
He travelled all year long around the country carrying the baton, a chisel, a hammer and an electronic counter, to record every chisel. He even went abroad in the search of the Argentine diaspora, visiting cities like Paris, Mexico City and Barcelona, where more than 800 expats joined the effort. “The baton is done by the people and it belongs to them,” says Pallarols. “We lend it just for four years to the president.”
And with the chiselling people can also share their wishes to the president in the notebook. “I hope you govern well,” wrote an 11 year kid from a rural area. Pallarols recalls that when visiting a city some men asked him to go to a man’s house, who was severely ill and could not walk. To Pallarols’ surprise, when he arrived to the house he found a healthy young man. Instead he was a fugitive of justice, for “a political crime”, Pallarols is told. “Thanks for allowing me to participate in this collective work, even from the distance of exile”, the man wrote.
Five notebooks filled with these types of comments were handed to Kirchner. And the president asked for a personal interview with Pallarols to go over the comments and the stories he gathered nationwide.
The day before the inauguration, I call Pallarols to find out the end of the process. He had just delivered the baton to the Ceremonial officer and got his pay: one Argentine peso, the equivalent of a quarter of a US dollar. “It is a symbolic price,” he says. “A baton like this would normally cost around 1500 dollars.”
If something stood out for him this year was the high participation of people. “I see it as a commitment to democracy.”
For the next few days his plan is just to rest. “At my age this long process, with all the travelling, is exhausting,” he confides over the telephone. “But I am already thinking of the following baton”.