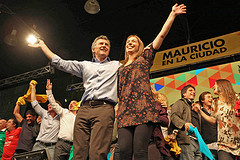 ON THE thin roster of candidates hoping to run against Cristina Fernández de Kirchner in her bid for re-election as Argentina’s president this year, one of the most promising was Mauricio Macri. The son of a wealthy businessman and the former president of Boca Juniors, the country’s most popular football club, Mr Macri was reasonably well-known nationwide even before he was elected mayor of Buenos Aires in 2007. The city’s economy has prospered during his time in office, and he was able to establish a new municipal police force, ending the city’s dependence on federal officers. With his conservative ally, Francisco de Narváez, barred from running for president because he was born abroad to foreign parents, Mr Macri looked like the right’s best shot to take on Ms Fernández.

To the disappointment of his conservative backers, however, Mr Macri has always been politically cautious. In keeping with his family’s business tradition, he is thought to enjoy governing far more than campaigning. Moreover, PRO, the conservative alliance he co-founded in 2005, has made few inroads outside the Buenos Aires area. And Ms Fernández’s popularity has soared since Néstor Kirchner, her husband and predecessor as president, died of a heart attack last October. Rather than offering himself up as a sacrificial lamb to Ms Fernández, Mr Macri announced in May that he would run for a second term as mayor instead.

The president was in no mood to concede continued control of the capital to Mr Macri, with whom she has repeatedly sparred in office, often hindering co-operation between the federal and municipal governments. Just as in 2007, she tapped Daniel Filmus, a former education minister, to run for mayor. Mr Filmus is one of the most moderate and professionally accomplished members of Ms Fernández’s entourage, making him a good fit for the capital’s educated and cosmopolitan electorate. Mr Filmus hammered Mr Macri for abusing his power, noting that the head of the city’s new police force, Jorge Palacios, is being prosecuted for illegal phone tapping. He also criticised the mayor for failing to reduce crime and poverty, and for delays in the expansion of the city’s underground train system.

Nonetheless, Mr Macri’s decision to abandon the presidential race was vindicated on July 10th, when he breezed through the first round of the mayoral election. The incumbent took 47% of the vote, just short of the absolute majority he needed to avoid a run-off. Mr Filmus took 28% and Fernando “Pino” Solanas, a left-wing filmmaker, finished third with 13%. Barring a major upset, Mr Macri now looks set to coast to victory in the second round on July 31st.

Does Mr Macri’s success bode poorly for Ms Fernández’s chances in October? Not necessarily. The wealthy city of Buenos Aires has long been hostile to her Peronist party (unlike its heavily populated working-class suburbs, which are the Peronists’ stronghold). Ms Fernández shrugged off Mr Macri’s victory over Mr Filmus in 2007 and won the presidential election easily. And because Mr Macri’s father, Franco Macri, is seen by many on the left as a symbol of ill-gotten gains for his dealings with Argentina’s 1976-83 dictatorship, the mayor’s continued presence on the national stage may help to rile up the president’s supporters (even though the elder Mr Macri has in fact supported the Kirchners’ government). Much to the opposition’s dismay, the status quo seems just as likely to continue in the Casa Rosada, the presidential palace, as it does in the mayor’s offices just across Buenos Aires’s central plaza.