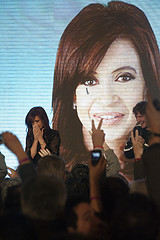 Depending on who you speak to, Argentina is about to enter either a glorious era of people’s rule or a dark chasm of authoritarianism. Cristina Kirchner, one half of the tandem that led Argentina out of economic chaos and back to growth, is heading for a landslide victory in Sunday’s presidential election. A win would earn an unprecedented third term for a faction that has governed Argentina since 2003.

Critics and supporters agree that “Queen Cristina”, as she is often referred to in the press, will emerge as the undisputed leader of a country where political opposition has for all practical purposes become absent.

“We are moving towards a single-party state with infinite re-elections,” says Sylvina Walger, a journalist who recently published a bestselling and extremely critical biography of the president, entitled simply Cristina.

Kirchner, predicted to win around 55% in Sunday’s first-round vote, is so ubiquitous here that she enjoys a first-name recognition comparable to that of Evita, or Eva PerÃ³n, the legendary wife of Juan PerÃ³n, who in 1946 founded the Peronist party that President Kirchner belongs to.

Like Evita, who died of cancer in 1952 at the age of 33, Kirchner’s massive popularity is partly based on a verbal war against a privileged social class held to be guilty of thwarting the prosperity of workers. But, unlike Evita, whose official status never rose above First Lady, Kirchner went from being a senator during the presidency of her husband, NÃ©stor, to becoming the first elected female president of Argentina in 2007.

“She is better at communicating with the people than her opponents,” says Horacio Verbitsky, columnist for the pro-Kirchner daily Pagina/12, who meets the president regularly. “NÃ©stor Kirchner used to say to me that she would prove even more capable than he had been, and he was right.”

But not everyone is so convinced of her abilities. Rivals, such as the leftist candidate Hermes Binner of the Socialist Progressive Front, warn that the global financial crisis will start to tell on Argentina’s economy before too long. And a startling US diplomatic cable released last year by WikiLeaks asked telling questions about the president’s constitution and mental health.

“Under what circumstances is she best able to handle stresses? How do Cristina Fernandez de Kirchner’s emotions affect her decision-making and how does she calm down when distressed?”

Kirchner came into her own following the death of her husband of a sudden heart attack last year. An outpouring of public sympathy ended a sharp decline in her popularity in the polls. Generous social spending, a consumption boom and renewed economic growth have done the rest, making voters indifferent to the repeated charges of corruption and illegal enrichment by the Kirchners and their close associates. “People just don’t want to know about it,” says her biographer Walger.

Reports indicate that Kirchner, who has never felt much sympathy for Argentina’s major newspapers, may seek to silence them completely once her mandate is renewed, in particular Clarin, a paper the forefront of investigations into the accumulated wealth of Kirchner officials and associates.

“There will be a war to the death against Clarin, which may not be a good newspaper but it represents what is left of freedom of the press today,” says Walger.

Her administration is not averse to employing strong-arm tactics against opponents. Commerce Secretary Guillermo Moreno, one of the president’s closest aides, last weekend led a group of Peronists and beat up a campaigner of the opposition PRO party who was distributing campaign leaflets on the streets of Vicente Lopez, a northern suburb of Buenos Aires.

“I demand that the president show she does not consent to such violent and authoritarian methods,” demanded another presidential rival, Ricardo Alfonsin, son of Argentina’s first post-junta president Raul Alfonsin.

But Kirchner, who does not give interviews to the press, remained silent. With her popularity so high, she has kept exposure to a minimum. She has not campaigned at all, speaking only through beautifully produced and emotionally charged television campaign ads under the slogan “Strength Argentina”.

How long this strength will hold in the face of an international economic crisis that could put the brakes on Argentina’s growth â€“ based largely on the high price for Argentina’s plentiful soy exports â€“ will probably determine the fate of the new Kirchner period. Already there are cracks in the economic wall, mainly a hidden inflation that is changing old and deep-seated habits. Bovine meat consumption, in a country that once prided itself on producing top-grade beef, is falling: it dropped by 22% in the last two years, while the price of beef more than doubled.

In a speech on Wednesday night, Kirchner dismissed predictions of an economic downturn in her next term. “The world is at a complex moment, during which the icons who tried to convince us that we were doing wrong, that we had to change course, have fallen. Thank God we didn’t change.” For now, at least, it appears that the majority of Argentinians agree with her.